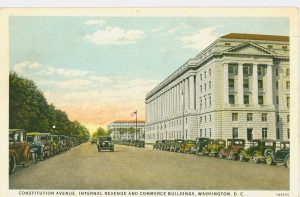 Funny that the IRS is more concerned about taxpayers exaggerating on their taxes than getting swindled!