The complexities of Social Security retirement benefits make it a difficult topic to mediate. It is an exceedingly important source of income for retirees, especially divorced and even affluent retirees. However, Social Security and its place in a person’s retirement income plan are critical items for mediators to understand to achieve the elusive goal of fairness and equity.

The maximum benefit in 2023 is $54,660 a year. Of course, most people don’t get the maximum. Still, as the benefit decreases, I find that it constitutes a greater percentage of income. And, Social Security retirement benefits are challenging to address in divorce settlement negotiations because State courts do not have jurisdiction over its allocation .

Maybe. But let’s first go over some Social Security background.

Later, the length of marriage required to qualify for benefits after a divorce was reduced to 10 years. When SCOTUS legalized same-sex marriage in 2015, survivor and divorce benefits extended to same-sex couples .

This short history of Social Security shows how it has evolved. Ex-wives and ex-husbands can now all receive retirement benefits based on an ex’s work record.

However, qualifying conditions must be met. The rules can be confusing and challenging to keep track of, especially for those who have had more than one marriage and divorce or those whose ex-spouse has died.

However, divorced people who claim on their ex-spouse’s record will not get more if they delay their benefits past full retirement age, 66 to 67 depending on the birth year. 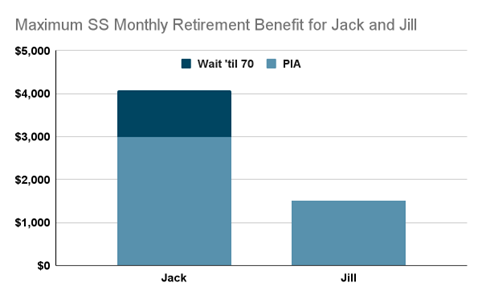 Note that should Jill’s own benefit be more than 50% of Jack’s, she will receive her own Social Security retirement benefit. She will not also receive her divorced benefit!

Sometimes people wonder how the age difference with their ex-spouse can affect their benefits. The good news is that the ex-spouse’s age when they claim it is irrelevant. As long as Jill claims at Full Retirement Age, she will receive her maximum divorce benefit independently of the timing of Jack’s claim.

Jack may be married or unmarried. It makes no difference. If Jack is (re)married, Jill and the current wife could both qualify for the 50% benefit from Jack’s record.

Suppose Jill, who receives the 50% benefit, remarries. In that case, her 50% benefit from Jack’s record stops unless Jill’s new spouse also gets a divorced spouse benefit. That’s except if the remarriage occurs after age 60.

Jill’s marriage must have lasted ten years or longer to claim Social Security retirement benefits on Jack’s record. Because of that requirement, sometimes people who think of divorce will delay until ten years of marriage are achieved. For example, if you’ve been married for 9.5 years, it may be worth waiting another six months. And with the slow speed of divorce proceedings, that is entirely possible without trying too hard!

People sometimes ask: what if you had two or more ten-year marriages?

Then, it can become complicated. Those who have divorced more than once from marriages of ten years or longer get the higher of the two divorced-spouse benefits, so long as they are currently unmarried.

For example, suppose that Sheryl was married to Patrick for 20 years and to John for 12 years. Sheryl has now divorced for the second time and has remained single for more than two years since her last divorce from John.

When Sheryl files, she can receive $1,600, half of Patrick’s PIA, because it is higher than John’s $1,400. And, no, she cannot get both Patrick’s and John’s retirement benefits!

If Sheryl divorced less than two years before, she must wait until her last ex, Patrick, in this case, has filed for his benefit. In addition, the worker on whose record the retirement benefit is claimed, Patrick, must have reached 62 years of age.

Patrick’s filing status is irrelevant to Sheryl’s claim if they divorced more than two years before. So unless Sheryl tells him, Patrick will never know if his ex-spouse has claimed.

When Your Ex dies

Mike and Marie are 66 and have been married for more than ten years and divorced for more than two. Because Marie is single and not remarried, she qualifies for a divorced-spouse retirement benefit based on Mike’s record, whether or not Mike has filed.

If Mike has passed away, Marie receives a divorced-spouse survivor benefit based on Mike’s record if she is currently unmarried or if she remarried after age 60. In addition, Marie’s benefit will be 100% of Mike’s Primary Insurance Amount (PIA), the amount that Mike would have received at Full Retirement Age. In the case of Mike dying, Marie’s retirement benefits are capped to full retirement age.

What if the same two people have married, divorced, remarried with each other, and divorced again? In that case, the length of the two marriages can be added together (including the time in between) to reach the ten years qualifying minimum. That is, if the remarriage happens before the end of the calendar year following the divorce!!

Say Mike and Marie were married for seven years, from May 2002 to August 2009. They remarried in December 2010 and re-divorced in November 2013 for three years. The total for the two marriages is ten years. Mike and Marie meet the 10-year requirement because their second marriage happened before the end of the calendar year after the first divorce.

If, instead, Mike and Marie had remarried in January 2011, the ten-year clock would have been reset to zero.

How would that work? Jill currently receives a $3,000 monthly pension from a police department in Texas. She has divorced Jack after more than ten years of marriage. Jack’s PIA is $3,200. Jill’s divorced-spouse benefit of $1,600 would be reduced by $2,000 (2/3 of $3,000), which reduces the benefit amount to zero. She doesn’t get any Social Security.

Suppose the spouse with the benefit also qualifies for a pension from an entity that doesn’t pay into social security. In that case, the Windfall Elimination Program kicks in. That reduces the spouse’s benefit payments, and the ex-spouse’s benefit adjusts downward as well.

What Does It All Mean?

As a reminder, Jack and Jill are retired and decided to divide their assets 50-50. Jack also benefits from a $3,000 Social Security PIA retirement benefit, and Jill has a divorced spouse benefit of $1,500. Jack opts to delay his Social Security until 70 when his benefit would increase to $4,081. Jill has no such option.

A common (but potentially dangerous) rule of thumb in retirement planning is that if a retiree begins retirement by taking a 4% distribution from assets and increases it annually with inflation, the retiree will not run out of assets in their lifetime (1).

As detailed in the table below, Jack and Jill may have divided their assets 50-50, which may look fair. However, Jill’s income will be 35% less than Jack’s.

This is not a challenge that can be dealt with directly in litigation because the courts have no jurisdiction over Social Security. However, a couple mediating could potentially address the issue to achieve a more balanced retirement income for both and a more equitable settlement.

The example of Jack and Jill is simplified from cases we might run across. There may be other assets, such as a pension, a vacation home, and rental real estate. There may be child support and alimony. Maybe Jill qualifies for her own benefit. There may be an inheritance looming. Jack and Jill  may be further away from retirement. Their investment style may differ.

Diverse circumstances will complicate the analysis. However, it is crucial for a couple and their mediator to understand the consequences of their decisions. That is so especially for women because they will need to stretch their assets to meet their longer statistical life expectancy .