Which Account Saves You More Taxes: the Roth IRA or the Traditional IRA?

The Tax Cuts and Jobs Act (TCJA), passed in December 2017, reduced individual income tax rates temporarily until 2025 . As a result, most Americans ended up paying less federal income taxes in 2018 and 2019 than in previous years.

However, starting in 2026, the tax rates will revert to those that existed up to 2017. The TCJA also provides for many of its other provisions to sunset in 2015. Effectively, Congress attempted to take away with one hand what it was giving with the other. Unless Congress acts to extend the TCJA past 2025, we need to expect a tax increase then. In fact, in a recent Twitter survey, we found that most people actually expect taxes to go up.

Some people hope that Congress will extend those lower TCJA tax rates beyond 2026. Congress might just do that. However, planning on Congress to act in the interest of average taxpayers could be a perilous course of action ! Hope is not a plan!

Given the reality of today’s comparatively low taxes, how can we best mitigate the TCJA’s scheduled tax increase? One way could be to switch some retirement contributions from Traditional IRA accounts to Roth IRA accounts from 2018 to 2025, and changing back to Traditional IRA accounts in 2026 when income tax brackets increase again. While we may not be able to do much about the 2026 increase, we can still work to reduce our lifetime taxes through planning.

Roth IRA accounts are well known for providing tax-free growth and retirement income within specific parameters. The catch is that contributions must be made with earned income that has been taxed already. In other words, Roth accounts aren’t exactly tax-free, they are merely taxed differently.

The Roth IRA is not tax-free, it is merely taxed differently

The following flowchart can provide you with a roadmap for deciding between these two types of retirement accounts. Please let us know if we can help clarify the information below! 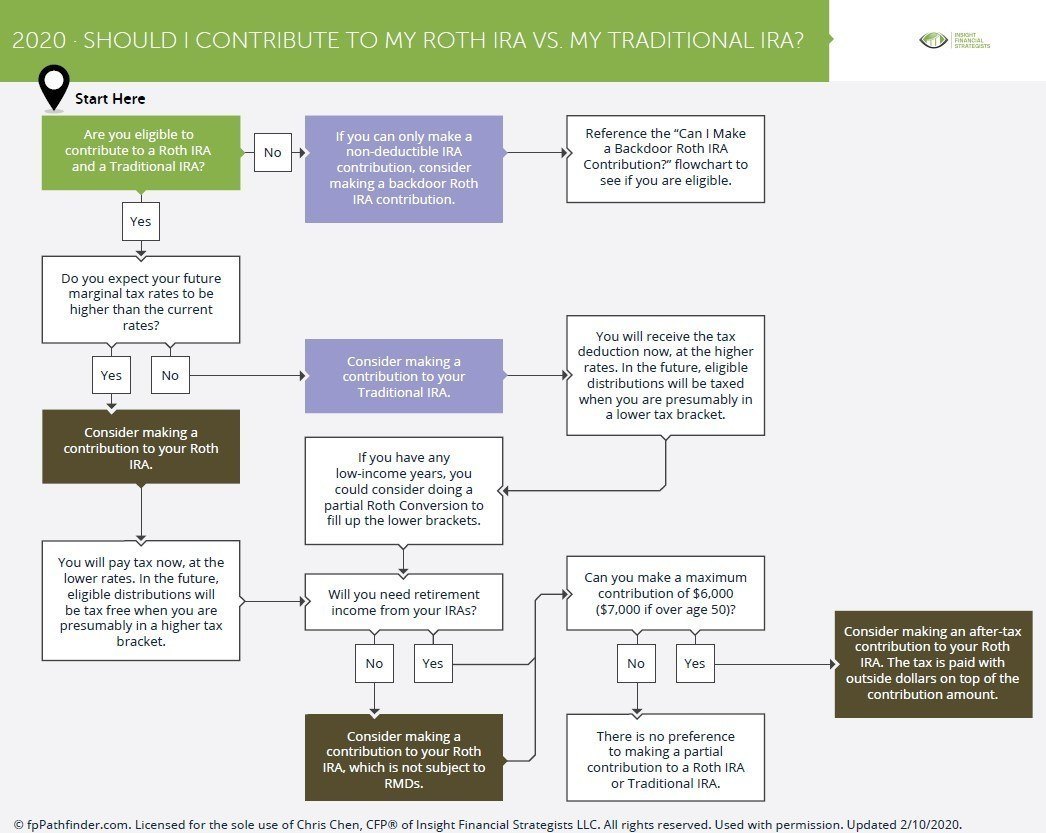 There can be considerations other than taxes before deciding to invest through a Roth IRA account instead of a Traditional IRA account . For instance, you may take an early penalty-free distribution for a first time home purchase from a Roth. Or you may consider that Roth accounts are not subject to Required Minimum Distributions in retirement as their Traditional cousins are. Retirees value that latter characteristic in particular as it helps them manage taxes in retirement and for legacy.

However, the tax benefit remains the most prominent factor in the Roth vs. Traditional IRA decision. To make the decision that helps you pay fewer lifetime taxes requires an analysis of current vs. future taxes. That will usually require you to enlist professional help. After all, you would not want to choose to contribute to a Roth to pay fewer taxes and end up paying more taxes instead!

As everyone’s circumstances will be different, it would be beneficial to check with a Certified Financial Planner® or a tax professional to plan a strategy that will minimize lifetime taxes, taking into account future income and projected taxes.

Check out our other posts on Retirement Accounts issues:

Is the new Tax Law an opportunity for Roth conversions?

Tax season dilemma: invest in a Traditional or a Roth IRA