Much of the emphasis of the Tax Cuts and Jobs Act (TCJA) passed in December 2017 affected individual income taxes. However, there are also impacts on investment strategies.

From an individual standpoint, the primary feature of the TCJA is a reduction in income tax rates.  Except for the lowest rate of 10% all other tax brackets go down starting with the top rate which drops from 39.6% to 37%. 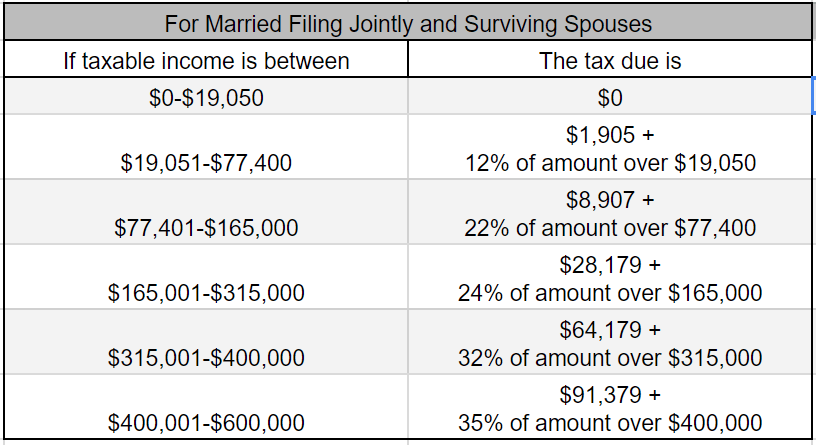 Even then, not everyone’s income taxes will go down in 2018 . That is because some of the features of the bill, such as the limitation on State And Local Taxes (SALT) deductions,  effectively offset some of the tax rate decreases.

However, in general, it is safe to say that most people will see a reduction in their federal income taxes in 2018. Of course, this may prompt a review of many of the decisions investors make with taxes in mind.

Most people expect to make the same or less income in retirement compared to working life, and thus assume that their retirement tax rate will be equal to or lower than their working year tax rate. For those people, contributing pre-tax income to a Traditional retirement account comes with the possibility of reducing lifetime income taxes (how much you pay the IRS over the course of your life).

Most people are pretty excited to see their taxes go down this year! However, the long-term consequences of the tax decrease should be considered.  While the TCJA was passed with the theory that it would stimulate growth such that tax revenues would grow enough to make up for the increased deficit created in the short term by tax cuts, few serious people believe that.  The most likely result is that we will experience a small boost in growth in the short term and that federal deficits and the National Debt will seriously increase thereafter.

In the opinion of the non-partisan Committee for a Responsible Federal Budget, not even the expectation of additional short-term growth is enough to temper the seemingly irresistible growth in the federal debt. 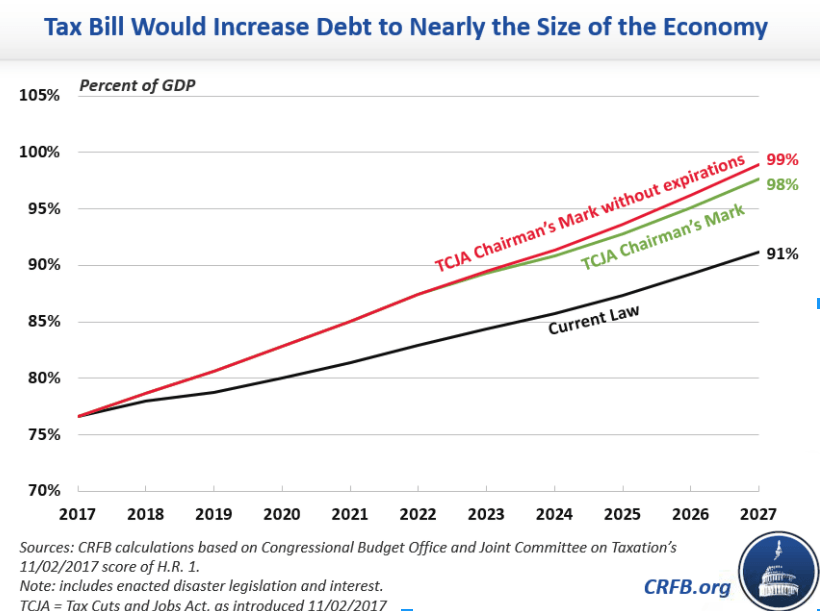 Increased deficits will make it more difficult to fund our national priorities, whether it is defense, social security, healthcare, or investment in our national infrastructure.  Therefore, I expect that we will initiate another tax discussion in a few years, most likely resulting in tax increases, in addition to the automatic tax increases that are embedded in the TCJA.

With federal income tax rates down in 2018 and our expectation that individual taxes will start increasing after 2018, now may be the time to consider a Roth instead of a Traditional account. The consideration of current and future tax rates remains the same. It just so happens that with lower tax rates in the current year, it becomes marginally more attractive to consider the Roth instead. 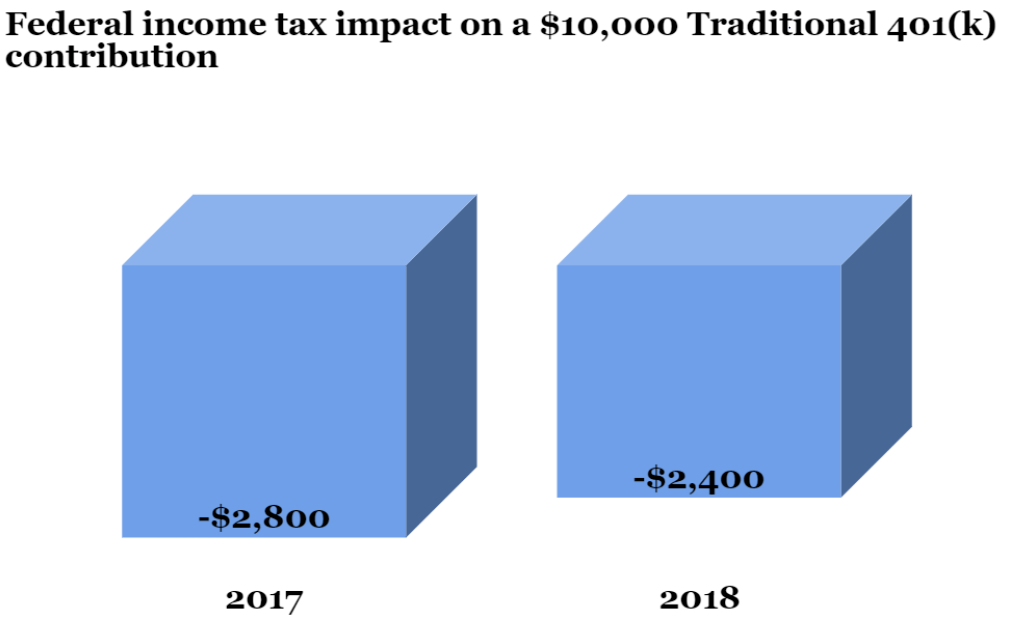 From a tax standpoint, contributing to a Traditional 401(k) is still attractive, just a little less so.  To optimize her lifetime tax liabilities, Lisa may consider adding to a Roth 401(k) instead, trading her current tax savings for future tax savings. If Lisa were to direct the entire $10,000 to the Roth 401(k), her 2018 income taxes would increase by $2,400 compared with 2017. Why would Lisa do that? If she expects future income tax rates to go back up, she could save overall lifetime taxes. It may be an attractive diversification of her lifetime tax exposure.

For instance, suppose now that the national debt does grow out of hand and that a future Congress decides to increase tax rates to attempt to deal with the problem. Suppose that Lisa’s retirement income places her in a hypothetical future marginal federal tax rate of 30%. In that case, she will be glad to have invested in a Roth IRA in 2018 when she would have been taxed at a marginal rate of 24%: she would have saved on her lifetime income taxes.

Of course, if Lisa’s retirement marginal tax rate ends up being 20%, she would have been better off saving in her Traditional 401(k), saving with a 28% tax benefit in her working years and paying retirement income tax at 20%.

Note also that Lisa would not have to put the entire $10,000 in the 401(k). She could divide her annual retirement contribution between her Roth and her Traditional accounts, thus capturing some of the tax advantages of the Traditional account, reducing the tax bite in the current year, and preserving a bet on a future increase in income tax rates.

Another possible course of action to optimize one’s lifetime tax bill is to consider a Roth conversion. With a Roth conversion, you take money from a Traditional account, transfer it to a Roth account, and pay income taxes on the distribution in the current year.  As we know, future distributions from the Roth account can be tax-free, provided certain conditions are met . A distribution from a Roth IRA is tax-free and penalty free provided that the five-year aging requirement has been satisfied and at least one of the following conditions is met: you have reached age 59½, become disabled, you make a qualified first-time home purchase, or you die. (Note: The 5-year aging requirement also applies to assets in a Roth 401(k), although the 401(k) plan’s distribution rules differ slightly; check your plan document for details.)  Because tax rates are lower in 2018 for most individuals and households, it makes it marginally more attractive to do the conversion on at least part of your retirement funds.

Consider David, a single pharma marketing communications analyst. With $70,000 in taxable income, he is now in the 12% marginal federal income tax bracket, down from the 25% federal income tax bracket in 2017. He is working on his part-time MBA in 2019 and expects his income to jump substantially as a result. Additionally, David, a keen student of political economy expects his taxable retirement income to be higher than his current income and overall tax rates to go back up before he reaches retirement.  David now has a sizeable Traditional IRA.

In this example, if David were to convert $10,000 from his Traditional IRA to his Roth IRA, he would incur $2,200 in additional federal income taxes. If David expects to be in a higher tax bracket in retirement, he would end up saving on his lifetime income taxes. 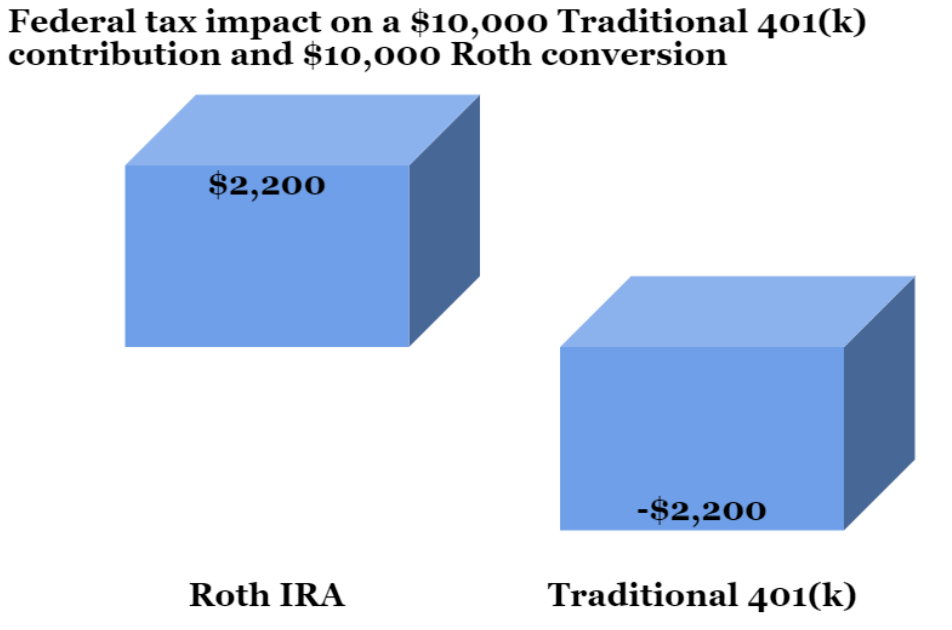 Table 3: Balancing a Traditional 401(k) and a Roth Conversion

This strategy may work best for people who expect to have a reduced income in 2018. Maybe it is people who are back in graduate school, or people taking a sabbatical, or individuals who are no longer working full time while they wait to reach the age of 70 and start collecting social security at the maximum rate.

It is worth remembering that Roth accounts are not tax-free; they are merely taxed differently . That is because contributions to a Roth account are post-tax, not pre-tax as in the case of Traditional accounts. You should note that the examples in this article are simplified. They do not take into account the myriad of other financial, fiscal and other circumstances that you should consider in a tax analysis, including your State tax situation. The examples suppose future changes in taxes that may or may not happen.

If you believe, as I do, that tax rates are exceptionally low this year and will go up in the future, you should have additional incentive to analyze this situation. The decision to contribute to a Roth IRA or 401(k) works best for people who expect to be in a similar or higher tax bracket in retirement , and have at least five years before the assets are needed in order not to pay unexpected penalties. Is that you? The financial implications of whether to invest in a Roth instead of a Traditional account can be complex and significant . They should be made in consultation with your Certified Financial Planner.